"After college I moved to Houston hoping to conquer the world. I had no idea I would be conquered by my own mind." 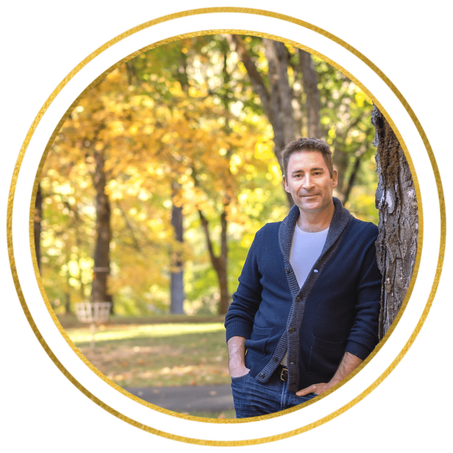 It happened in the spring of 1997. I was an up-and-coming mechanical engineer, just 2 years out of college, working for a giant computer firm called Compaq Computers. I had left my family and my hometown back in Wisconsin and relocated to Houston, hoping to hunt success in the corporate world.

Little did I know, life had a vastly different plan in mind. In fact, I was about to be dragged through the bleakest, most harrowing experience of my life.

It started, surprisingly enough, in an arena where I had always taken great delight: Public speaking.

I'd been asked to give a brief presentation to a group of 40 of my colleagues. One night while I was preparing my notes, a small, whisper-of-a-thought floated through my mind:

"What if you get nervous up there?"

At first I just wrote it off. I'd spoken in front of much larger groups plenty of times before. So this one was no big deal.
But somehow that little thought had plunged its tiny claws deep into my mind, and for the rest of that night — not to mention for all of the remaining nights leading up to my presentation — I struggled to pry it off. What had first appeared as a tiny nuisance had somehow exploded into an all-out obsession.

On the day of my presentation, with nerves wracked by anxiety, I stepped up in front of the group to present my ideas. As I turned to face the audience, still desperate to find some way through the moment, I panicked. In an instant my throat constricted, my hands began shaking, and I could barely form complete sentences.

Somehow I fumbled my way through the rest of the presentation, but everyone in that room knew what was happening. This was a level of humiliation and embarrassment I'd rarely, if ever, experienced.

I wish I could tell you that that's where it ended, but the truth is, things were about to get much, much worse.

That little "what-if" monster that had gotten unleashed inside my mind was now on a rampage. Having all but destroyed my work life, it moved on to my relationship with my girlfriend, which it tore to pieces in a matter of weeks.

From there, having nothing else left to feed on, it moved on to the one source of food that still remained:

A Mind Set Against Itself

I had no idea how it had happened, but somehow my own mind had turned on me. It was bombarding me with the most terrifying thoughts and feelings I'd ever experienced. It was pure hell... an experience I wouldn't wish upon my worst enemy.

It's an extraordinary position to find yourself in — extraordinary because even though a part of you remains rational and clear-thinking, the overwhelming sense of hopelessness you feel drives you to contemplate solutions that are nothing short of dreadful.

Some people believe it's simply a matter of "deciding to pick yourself up by your own bootstraps." I can tell you from firsthand experience that when you're struggling with the bleakest forms of depression, it's not quite that simple.

Believe me, it's not something to take lightly. And that's why I had to do something . . . before it was too late.

I searched frantically for help, seeking out one expert after another. I started with a counselor at work. I'll never forget the look on her face when I described what my mind was doing to me. She didn't say one word to me. Not a word! She stood up, walked to her desk, dialed downtown, then cupped her hand over the phone and whispered, "I have someone here who needs to come see you."

That's when I knew things were bad.

Unfortunately the so-called expert she referred me to turned out to be another useless dead-end. He was little more an egomaniac. After jabbering on for nearly 20 minutes about his professional conquests, he listened to me for 5 minutes, scribbled out a prescription, then ushered me out the door.

Intuitively I knew that a pill would do nothing but conceal the real root of the problem. My own constitution rejected it as a permanent solution.

I had to keep searching.

A  World of Imposters

That led me to one of the most respected Yoga and meditation centers in my area. I arranged to meet with the head Yogi at his home. Once there I quickly learned, much to my dismay, that he too was an imposter. As I watched him mindlessly preparing tea while spouting off every four-letter word in existence, I knew he had nothing to offer except the pretense of wisdom.

I couldn't believe it. These were supposed to be the experts, and not one of them could offer so much as a speck of authentic help.

I had never felt so lost and alone.

But one thing was now clear: If I was going to find my way out of this condition, I would have to do it on my own.

What happened next would prove to be the turning point to which I owe my entire life.

A few days later, I paused in front of my bookshelf and decided to rummage through my book collection. I pulled out a book from one of the past masters — one that had been sitting on that shelf the entire time. I don't know why it took so long to go back to it. Maybe I wasn't ready. But right there in that one little book was a spark of genuine understanding unlike anything I had known up to that point. It not only explained what I was going through . . . but why as well.

In that moment I felt an infusion of hope flood through my entire system. I didn't realize it at the time, but what I had just discovered was the existence of Life's most powerful force of healing:

Well, it didn't take long. I pulled out my entire collection of true spiritual books and I immersed myself in them with newfound vigor — and newfound appreciation — driven along by an inescapable need.

Keeping Company with What Cares for You

Suddenly I was uncovering secret after secret, insight after insight, one after another after another. The more I gave to understanding these principles, the more I was given in return.

It wasn't always easy. Far from it. At times it felt like I was sweeping water off a sidewalk. For an instant everything is clean and clear, then a second later, all the same despair comes rushing back in.

But I stayed the course and took advantage of every opportunity I could: If I was driving to work, I had a tape playing in the tape deck (yep, we're talking good ol' cassette tapes!). If I was at the gym, I had a walkman strapped around my arm. If I was at home, I had a book in my hand or a video playing on the TV.

These truthful principles had become my constant companions. And do you know what happened? Somehow, by keeping constant company with these ideas, I rediscovered my love for life.

And that awful desperation I'd been battling? It dissolved completely.

But that was only the half of it. Because what replaced the desperation was an understanding about life that, to me, was nothing short of miraculous.

And now here I am today, 25 years later, and I can say beyond the shadow of any doubt:

There truly is an extraordinary purpose for a human being's life. A purpose that nothing in the ordinary world can ever satisfy. It is an unquenchable flame that burns incessantly in the human heart, and, once understood, it will guide you toward a life that is unimaginable.

But that leads us to the $64,000 question . . . how exactly do these ideas turn into understanding?

Where the Path to Higher Possibilities Diverges

Looking back on it, I can tell you one thing with absolute certainty:

The decision to keep myself immersed in these principles was the single most important decision of my life.

Had I not done that, I can only imagine what would've become of me.

Most people give up on these ideas too soon. They plow up the seeds before the first roots have descended into the soil. Others treat these ideas like weekend vacations, visiting them for pleasure and relaxation as though they were island resorts.

But worse still, those individuals who give up on their study of these life principles will never know the extraordinary understanding they would've uncovered, had they just persisted through the difficult times.

You have to keep company with what is Right, Good, and True. And you have to keep yourself in the right environment where these powerful ideas can work on you.

I know how impossible that sounds.

And, frankly, in this world, without a connection to Higher Wisdom, it IS virtually impossible.

This website and the programs we produce are intended to create an online connection to that Higher Wisdom.
​
Thanks for being here.

An Online Retreat Center for Those Seeking Inner Freedom & Understanding

How do we accomplish this?

​By helping you to understand the root causes of these debilitating conditions while at the same time helping you to discover a source of meaning and purpose that is truly breathtaking.

Scholarships are available upon request.

Happiness Breakthrough: The Ultimate Shortcut to Finding a Life You Love
​​...without years of expensive therapy or having to change your circumstances.